Something odd’s happened to my writing of late.

You see, for the past 20 years (or so… I’m old, numbers now mean less and less to me) I’ve generally written on some sort of electronic typing device. Starting with the good ol’ Commodore 64 in the 1980s, through various incarnations of the Pentium through to laptops and the current PC, I was finding that typing my ideas (for want of a better term) straight onto the magic letter screen in front of me did three things: (a) saved me time, (b) made editing easier, and (c) made it far easier for me to ignore my strange spelling and grammar errors through the marvels of the F7 key (yes, Microsoft Word… hate me later). My output went up and…

However, it did  make writing novels far easier, and because the world wants people to type things, easier to send things off, and, nowadays, email them to various people who might want to give me money for what I write. Oh, yeah, and my handwriting is so bad that even doctors ask for translations… and if I leave something for a few years I often have no idea what I think I might have meant.

According to my year 11 English teacher, this is easier to read than my handwriting. She’s right.

So, for example, I found an idea from the 1980s written on the top of a maths test (19/20 – nerd on!) that said, I believe, something along the lines of: “Idea 3: Anthropologists find Adelaide in the future under a desert.” Not the best of ideas, to be sure (correction: it’s shit), but my first reading of it after all that time was: “Idez: Australopithecus final Adnoid in fissure and a dsrhrt.” Which, if anything, could possibly be even worse. 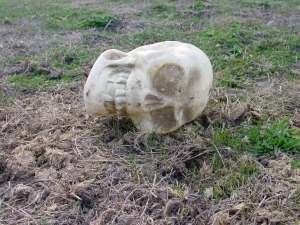 Actually, a story about the final Australopithecus in a world of Homo Erectus could almost be interesting…

Anywho… It started about 2 years ago now, but in the past four months it’s gotten worse and worse. The laptop is used for watching BBC panel shows on youtube.com (David Mitchell is a master. Seriously) or for catching up on the latest results on various wrestling websites (don’t judge). 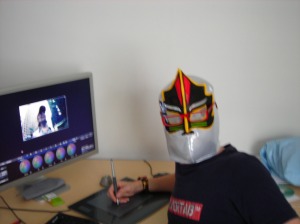 This is not me. I wouldn’t wear the t-shirt or use the pen thing. No, it’s the t-shirt.

But what about the writing? I hear you ask, getting me back on track (thank-you). Well, I have started to once more do it by hand. I have filled three A5 notebooks, gone through 2 A4 pads and countless other pieces of paper that I spend at least one day a fortnight collating into something resembling order before I finally type it up (making the typing the editing part of the process as well). I have killed 4 mechanical pencils and an entire packet of biros.

I have found a strange feeling of joy and freedom in writing. Actually writing writing. Not writing forming words in my head into something resembling a narrative and getting them onto the screen, but the physical act of writing. My handwriting has, somehow, got even worse over the intervening years (probably something to do with too much typing) (Where was I?) (Oh yes… sorry.) but I still am finding myself writing.

I think there are 3 reasons (why always threes? Sorry again…) why this is the case: (1) it is so much easier to do it anywhere; (2) lack of electricity is not a problem at all; (3) when you run out of pen and paper some blood and a leaf from a tree with a pointed stick (or bird’s feather, like some sort of bizarre post-modernist quill) makes a perfectly acceptable substitution.

I guess. I mean, I wouldn’t actually know… 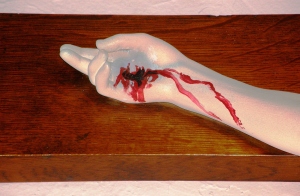 A blotter may be necessary, though.

There may be a number 4 as well – it is easier to doodle on a pad when I’m trying to get ideas to come, whereas a computer convinces me to play 47 games of Spider Solitaire (or until I win a bloody game), or look at pictures of interesting things on the Internet, reading “tweets” by people I don ‘t know, taking away writing time and killing my creativity.

So I sit there in a pub, or while the kids are swimming endless laps in their efforts to achieve Olympic glory in 10 years, or in a coffee shop (at which I drink hot chocolate; I hate coffee) with all of my friends interested in this sort of thing – okay, alone – with a pad or a notebook and a pen/cil, and I write.

Much like this… only nowhere near as neat and tidy.

So, after all that, that’s all this blog is about. I’ve gone back 25+ years and now write on paper with a pen.

This entry was posted on February 5, 2014, 11:07 pm and is filed under Writing. You can follow any responses to this entry through RSS 2.0. You can leave a response, or trackback from your own site.

Publishing with a focus on diversity

Observations and random thoughts from a "not so teenager."

Another site by a writer.

gardens, dogs, thinking, all go together...

Regular updates about Mel, her ongoing trials and tribulations, political views and activisim as she seeks Equality for ALL!

Z At the Movies

It's not that hard being a film crickett.

Musings on a mad world

Write Your Own Story